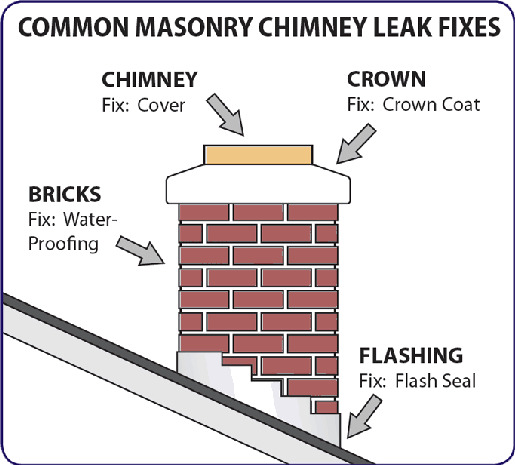 If you have started to notice a water leak in your ceiling, you most likely assume it’s the roof, however, the chimney is often the culprit. If you have an older chimney, chances are the leak could be coming from one of several areas within the chimney itself. We put together a list of common chimney leaks to help you determine if it’s the chimney leaking or the roof leaking.

Chimney Crown or Covers
One of the most common and simplest to fix chimney leaks is from a lack of a chimney cover. If the chimney does not have a cover, water and/or snow falls directly down the shaft. A cover eliminates this as well as protects against animals and debris. It not only keeps stuff from going inside the chimney but it also helps reduce the risk of CO poisoning by preventing blocks.

Chimney crowns are typically the cement part on top of the chimney that protects the bricks from moisture. Cracks in the crown usually occur with age from shifting or shrinkage. These cracks allow water to travel straight through the chimney.

Bricks and Mortar
Much like chimney crowns, bricks and mortar over time can crack from shrinking or shifting. The mortar in-between the bricks should not have any gaps or missing sections. This allows water to get in those spaces and remain wet. More often than not, this is the leading cause of leaks.

Lining
Though rare, the chimney lining could be the cause. Older chimneys either may not have a lining at all or one that is not properly fitted. This is usually spotted by water stains or peeling paint down the wall where the chimney runs inside the house. Simply having a correct fitting liner installed will usually take care of the issue.

Flashings
Flashings are often made of aluminum and goes in-between the bricks of the chimney and the top of the shingles to seal the gap where the bricks come through the roof. It’s then sealed with a waterproof tar. Any cracks or deformities in this section can lead to water leaking inside the home. It is advised the have flashings inspected when having a new roof installed. Generally, the flashings need to be replaced when it’s time to replace the roof.

Once you’ve noticed water leaking, take a moment to try and locate the source of the leak. Achten’s Quality Roofing is available to inspect the area and determine whether roofing or chimney service is needed. If your roof in still under warranty and flashing were installed, the repair is covered by the warranty*. If it ends up being a chimney leak, Achten’s has you covered!